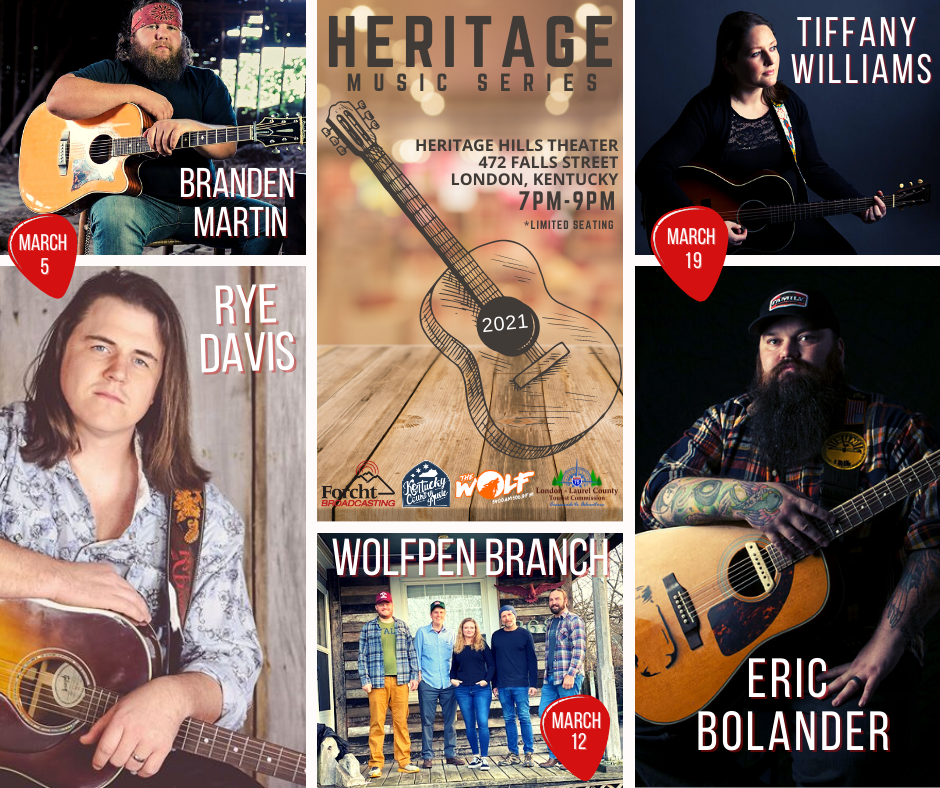 London, Ky. (February 3, 2021) – London-Laurel County Tourism, along with Forcht Broadcasting’s WFTG The Wolf, and Kentucky Country Music have teamed up to produce an intimate acoustic concert experience, Heritage Music Series. Multiple Kentucky based singer-songwriters will take to the stage the first three Saturdays in March at Heritage Hills Theater. All shows will begin at 7:00 pm with limited socially distanced seating.

On March 5, Rye Davis will team up with Branden Martin for the first show of the series. Both have been named one of Kentucky Country Music’s Music Acts to Watch list due to their increasing popularity among music fans. Their blend of stone-cold honkytonk songs are perfect to listen to for fans of Alan Jackson, Randy Travis, Cody Jinks, among others. Tickets for this show will be $15.

Then on March 12, Wolfpen Branch, formally known as Hancock and Shouse, will be bringing their 5-piece band of music all-stars to the stage. The band consists of Arthur Hancock, Chris Shouse, Roddy Puckett, Kati Penn, and Aaron Bibelhauser. Bluegrass and Appalachian music fans will enjoy their unique style up on stage. Tickets for this show will be $20.

Finally, on March 19, Tiffany Williams and Eric Bolander will conclude the series as part of the celebration of releasing their new albums collectively. Letcher County native, Tiffany Williams, recently recorded “You’ll Never Leave Harlan Alive,” alongside Laurel County native, Darrell Scott, who penned the tune. Eric Bolander provides a soulful laidback Americana sound to his performances. Tickets for this show will be $15.

Tickets for the Heritage Music Series will go on sale Wednesday, February 3rd, at 10:00 AM via Eventbrite. For those that purchase tickets for all three events by March 1 will receive a complimentary signed poster from all the artists. There are limited tickets per show to follow CDC guidelines. Masks will be required by everyone to wear at all times, as well as social distance protocols.

For more information, be sure to check out the London-Laurel County Tourism website at https://visitlondonky.com.