The Secret to Great Bourbon 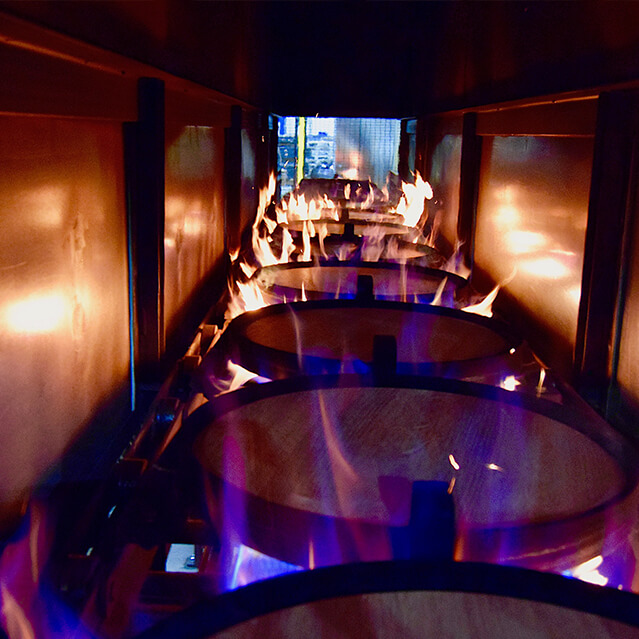 14 Feb The Secret to Great Bourbon

Posted at 15:25h in Blog Posts by Kelly Burton
0 Likes

The Bluegrass State of Kentucky is known for it’s Basketball, Fried Chicken, Horses, and Bourbon. We may not know the secret ingredients to Col. Harlan Sanders 11 herbs and spices. But Robinson Stave Mill Cooperage does know the secret behind great bourbon. IT’S THE PEOPLE! Behind great bourbon are great barrels. Behind our barrels are great people sharing the same compassionate vision and values of hard work, quality, and enthusiasm. Our goal is:

Securing renewable white oak logs from all over the eastern U.S. They turn them into staves to produce 53-gallon barrels known throughout the industry for their quality. White oak has a much tighter cell structure than other woods, which allows our barrels to hold up for years without leaking and creating a slow, gentle interaction with the bourbon.

They char the insides of each barrel to provide the distinctive color and taste for some of the best-known bourbons in the world. It’s this char, which is our closely-guarded secret, that gives bourbon its distinctive amber color and woodsy flavor.

Kentucky is known as the best place to age bourbon because its cold winters and hot summers allow the charred oak barrels to alternately absorb and release the whiskey.

This process reoccurs year after year—the length of time determined by each distillery and brand—until the whiskey turns into bourbon ready to meet the awaiting palettes of consumers.

The History
The late C.B. Robinson took over the stave mill in 1958 after his father died in a car accident. He built it, along with his family, into a major supplier of oak barrels to Kentucky’s booming bourbon industry. He was known for humbleness and hard work, often working as many hours or more than his men until he died in September 2016 at age 89.

Like his father before him, Robinson expected his children to help in the family business but did not offer them cushy jobs. Sons Joe and Ronnie were just 14 and 10 years old when their father took over the stave mill. They worked every evening after school and in the summer to get the business up and running again.

“They did men’s jobs,” Robinson said in a magazine article in 2008. “But they were big assets.”

Robinson and his wife, Imogene, who survives, were proud of their four children. He affectionately called them his “four roses,” which happens to be the name of a popular Kentucky bourbon.

Today, Joe is involved in the stave mill while Ronnie provides his expertise in buying and grading logs. Deborah works in human resources and daughter Diane previously worked in the office for the company.

Grandson Joe Jr. manages the new cooperage. Daughter-in-law Brenda works in accounting. Son-in-law Terry Nantz has managed the old cooperage since 1995, after starting work for C.B. in 1974 while he was still in high school.

No matter how big the company gets, the philosophy of taking care of employees will never change.

The Private Tour
Robinson Stave Mill Cooperage is proud to continue to serve our community, state and world with their quality barrels. Private tours can be scheduled on special days by contacting London Laurel Tourism Commission at 606-878-6900 or email toursim@lltc.net for private tour dates. Small groups up to 15 people.